Assembly has two weeks to complete its work before recess 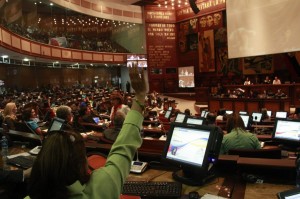 The National Assembly will work two weeks before entering to legislative recess from 4 to 19 August. Several issues are resolved and another await its analysis.

The AP Coordinator Fausto Cayambe, said that he expects the reports for the first debate, of the Organic Code of Process and, for the second debate, the Electric Service law, are delivered before August 4.

In addition, two workshops on amendments to the Road Traffic Law are pending, which are not discarded of leaving them after the recess.

Out of these reforms, in the official agenda there are also pending laws that were planned for the second quarter: Legislative Branch, Culture and Mobility.

The opposition projects still do not go through an approval by the plenary. An example of this is the reform of the Disability Law, which already has a report for the first debate, but it is not yet considered in the agenda.

Foreign Ministers of Colombia and Ecuador will review agreements