Assembly resumes activities with several themes on the agenda 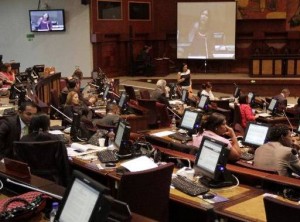 Assemblymen retake today work activities after the break for the carnival holiday.

On the agenda of the National Assembly there is a package of reforms that already has reports for the second debate and which is expected to be approbed until June. In addition, the creation of the Equality Councils and the laws of the Water Resources and the Land will be defined.

Gabriela Rivadeneira, president of the Assembly, announced that today is scheduled a meeting of the ruling bloc with the aim to propose a constitutional amendment that enables the re-election of President Rafael Correa, in the elections of 2017.

One of the priorities is the approval of the Organic Law of the Legislative Function and the Law of Creation of the National Equality Councils. furthermore, the agenda contains the Law of Knowledge Economy and discussions of the new Code of Labour Relations, Health and amendments to the Law of Popular and Solidarity Economy.

On the other hand, the Justice Committee works towards the promotion of the Integral Criminal Code (COIP), which will fully integrate the diffusion process.

Referendum in Crimea moves the population and affects tourism