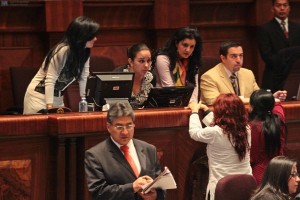 The President of the Assembly, Gabriela Rivadeneira (AP), convened the plenary assembly to approve a rejection resolution to the declarations by the Inter American Press Association (IAPA) on Ecuador. The meeting is scheduled for October 27, from 09:50.

Last week, within the framework of its general assembly, the IAPA demanded the Ecuadorian government to “respect freedom of expression and abrogate the Communications Law and thereby the country frames in international treaties on the matter.”

In the draft resolution, drawn up by Rivadeneira, the decisions of the IAPA “completely undermining on human sovereignty, independence and self-determination of the Ecuadorian State” are rejected.