China would eliminate the death penalty for nine offenses

China, the country with more executions in the world, discuss the removal of the death penalty as punishment for nine offenses, including smuggling of weapons and nuclear artifacts or hinder the work of the authorities, out of the 55 that currently can be punished with the sentence.

As reported on Monday (Sunday in Ecuador), by the official Xinhua news agency, the National Popular Assembly of China discusses the possibility of reducing the number of crimes punishable by death during the bimonthly session that began today and will end on Saturday.

The nine crimes include smuggling of arms, ammunition, nuclear materials or counterfeit currency; counterfeiting; fundraising by fraud; manage or force another person to engage in prostitution; obstructing the work of authorities and generate rumors to confuse others in time of war, according to the draft debated by the lawmakers.

In the event of the death penalty as punishment gets excluded, these crimes will entail a maximum of life imprisonment, according to the document accesed by Xinhua. China does not publish the number of executions carried out annually and both justice and prison authorities keep strict secrecy, which prevents obtaining the actual data. 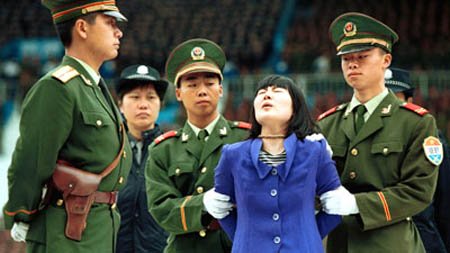