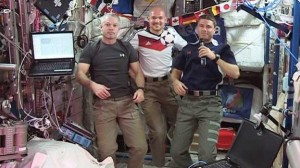 From space, astronauts Reid Wiseman, Steve Swanson and Alexander Gerst, wished good luck to the players of the World Cup

Astronauts Alexander Gerst from Germany and the Americans Reid Wiseman and Steve Swanson in a statement, wished good luck to the football players that participate in the World Cup Brazil 2014, “Commander Swanson and flight engineers Gerst and Wiseman from orbit 370 miles above Earth wish the fans of football and the World Cup 2014 a peaceful tournament,” said NASA.

The astronauts are on the International Space Station (ISS), and according to the U.S. space agency, despite forming a united crew, “Americans and their German colleague today have a little friendly competition.”