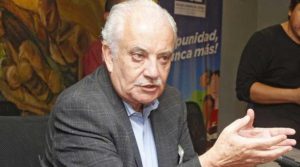 Attorney General Galo Chiriboga and Procurator General Diego García met on the morning of Thursday, February 23 to discuss a unique position in the Odebrecht case.

Prosecutor Chiriboga said that they would adopt this stance in criminal matters and the compensation.

On December 21, 2016, the United States Department of Justice unveiled a report that involved government officials from 12 countries in receiving bribes from Odebrecht to obtain public bids.

Ecuador was one of those countries mentioned in the report, and there is the possibility of reaching agreements for the payment of compensations, as it has happened in several countries.

The prosecutor pointed out that the Brazilian construction company approached to keep the dialogues.

For this subject Chiriboga has had meetings in Peru, the United States, Brazil, and Colombia.