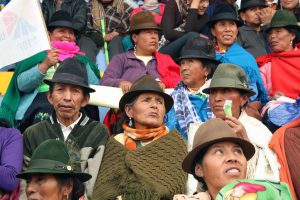 On Wednesday night, presidential candidate of the CREO-SUMA party, Guillermo Lasso, met with indigenous leaders during his visit to Cuenca and yesterday, February 23, he thanked their support.

Meanwhile, other influential leaders such as the former Assemblywoman of the Cotopaxi province, Lourdes Tibán; And the president of the Ecuarunari organization, Carlos Pérez Guartambel, have expressed their support for the ‘change’ promoted by the opposition hopeful.

Lasso thanked them because “they understand that the country is divided between the dictatorship of a political party and the democracy.”

“We prefer a banker rather than a dictatorship that has stripped us of our territories, declared a state of emergency and locked us up in jail,” Perez said.

Tibán invited all the bases of the left to “rebel” and in the second round to end in the polls with the party that has governed a decade.

Yesterday, the Confederation of Indigenous Nationalities of Ecuador (Conaie) took a decision on this subject. “No to the continuity of the dictatorship of the correism[1]  or the consolidation of capitalism. The vote is anti-correism.” That indicates the resolution, although it does not openly say that they will vote for the presidential hopeful of Creo.