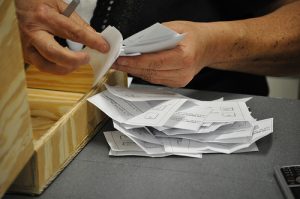 The scrutiny of votes abroad is still ongoing.

The scrutiny in six provinces and three districts abroad was missing until 14:00 yesterday to obtain the final results of the vote for provincial and migrants legislators. 100% of the votes have been already counted in the Manabi province.

The districts abroad have the least percentage of votes counted, ranging between 71% and 86%. The only province with less than 90% of votes counted was Guayas.
Regarding parties, Alianza PAIS (AP) won in Esmeraldas, in three districts of Guayas, in Los Ríos, two districts of Manabí, Morona Santiago, Napo, four districts of Pichincha and the three constituencies abroad: The United States, Canada, Europe, Asia and Oceania, Latin America, the Caribbean, and Africa.

Meanwhile, the CREO-SUMA Alliance occupies the second place in Esmeraldas, two districts of Manabí, four districts of Pichincha and the two constituencies abroad: the United States, Canada, Latin America, the Caribbean, and Africa.

Although AP is the most voted political organization in most jurisdictions, its members are not always the most voted. In the case of Morona Santiago, the most voted Legislator is Celestino Wisum, who belongs to the CREO-SUMA alliance.

The IESS will use savings to pay pensions