Last Wednesday, the militants of the self-proclaimed second electoral force in the country, Avanza, met for more than five hours in Quito, to furthermore achieving three resolutions.

The first one is to join the Frente Unido de Izquierda, formed by Alianza PAIS and the socialism to achieve governance; the second one, not to prioritize discussion of  indefinite reelection because there is enough time for it; and finally, “fight” to get the chairmanship of the Association of Municipalities of Ecuador (AME), because they consider the most viable option since they have most municipalities in the country. 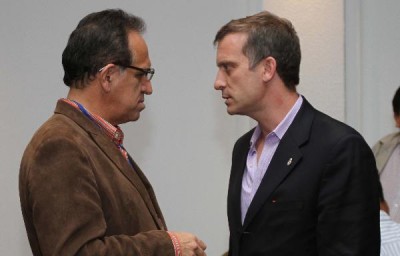 Directives of Avanza Ramiro Gonzales (left) and Alfonso Maron at the party meeting.