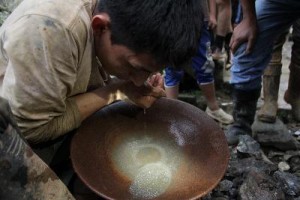 With a new reform of the Mining Law, the Ecuadorian Government seeks to expand its incomes to not depend on petroleum and taxes. The third source has been to turn to indebtedness, inside the country or abroad.

The state issues bonds and the Institute of Ecuadorian Social Security (IESS for its Spanish acronym) purchase them in exchange for a fee and a fixed term.

In addition, the Government has announced it will issue $ 700 million of bonds abroad and asked for USD 1,000 million to the World Bank. It transferred as collateral (warranty) half of its gold reserves, for a credit of USD 400 million from Goldman Sachs with an annual rate of 4.3%. That bank valued at $ 1,299 each ounce.

For one year, the sector has not received foreign investment due to the heavy tax burden. With the new changes in the current Mining Law, regarding regulations and decrees related to the activity, the Government hopes to realise some projects of gold, silver and copper that have failed to pass the pre-stage for the mines exploitation.