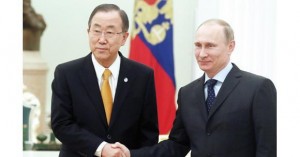 The UN Secretary General Ban Ki-moon declared yesterday that Russian President Vladimir Putin assured him have no “any intention” to invade the south and east of Ukraine.

“President Putin told me he had no intention of carrying out a military operation,” replied Ban to reporters who asked about a possible invasion of Russian troops in southern and eastern Ukraine, where most of the population speaks Russian.

“I must also say that President Putin expressed his concern about some extremist elements and in relation to the whole motion along the borders,” Ban said.

Likewise, Putin called Barack Obama yesterday to talk of a U.S. proposal on the situation in Ukraine, the White House announced.

The U.S. proposal will be handled directly by the foreign ministers of both countries, John Kerry and Sergei Lavrov said the U.S. presidency.