Ban Ki-Moon: Rights of migrant children should be guaranteed 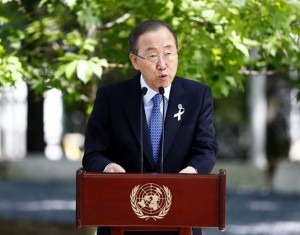 Ban Ki-moon, Secretary General of the UN, today urged the countries involved in the crisis triggered by the massive influx of Central American children to the U.S. border to treat them with dignity and ensure the protection of their rights.

“We believe it is important for countries to treat migrants with dignity and ensure that their rights under international law be respected, especially when it comes to children,” said in a press conference Stéphane Dujarric, Ban’s spokesman .

Many of the children “fleeing persecution and recruitment into gangs and other criminal groups, violence in their communities and homes and poverty and inequality,” said the UN, citing the report of the United Nations High Commissioner for Refugees (UNHCR).

The UN had already indicated in earlier days its “deep concern” about the situation of Central American children detained in U.S. shelters in a statement released in Tegucigalpa.