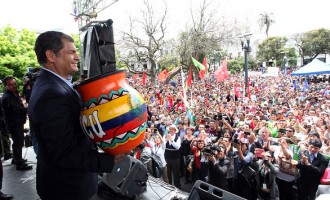 Dozens of social groups, indigenous and political parties as Avanza yesterday morning gathered outside the Government Palace to express their support for the Water Law.

With the presence of several officials of the National Assembly and Ministers of State, President Rafael Correa greeted the demonstrators. Delia Caguano, President of the Confederation of the Indigenous Movement of Chimborazo (COMICH), handed him a pot of water on behalf of her peers.

The leader also handed over a manifesto with 7 points claiming the majority support to the Government. The first item is the support of the Water Law, approved last week by the National Assembly. “Mashi President, we support and we will defend this law that guarantees us to live with dignity,” said Caguano.

Correa called for the water boards to rebel against the indigenous leaders, that according to him, “manipulate them and blackmail with political interest and penalties.”

The President clarified that the new legal framework does not pretend to privatize water, but will democratize the resource management. “It is a rude lie to say that the wateris going to be privatized,” he claimed. The privatization is prohibited in the Constitution and the Water Law.