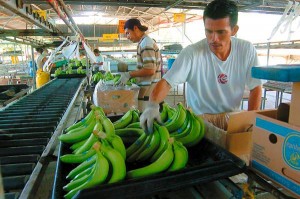 Importers must pay a fee for entering the Ecuadorian fruit to various markets worldwide. This measure concerns the banana sector.

In the case of the European Union, the protection will change from 37 cents to 54 cents. This, from 2015.

“It is true that we have signed an agreement with the EU, but that will take effect in the second half of 2016”, said Eduardo Ledesma, Director of the Association of Banana Exporters of Ecuador (AEBE for its Spanish acronym).

Ledesma added that in markets such as Turkey, Ecuador lost about 40,000 boxes per week because Colombia enters without a fee.

Ecuador expects financing of China for construction of refinery