Barcelona will play against Espanyol at the Monumental Stadium 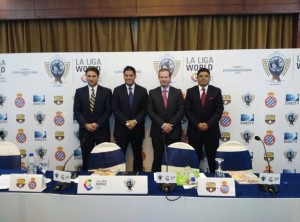 The Barcelona Sporting Club will play the Euroamerican Cup against Real Espanyol on Thursday May 28th at 19:30 at the Monumental stadium, announced the board during a press conference. Ecuadorian striker Felipe Caicedo plays for Espanyol. This game is played for the 90 years of the foundation of Barcelona, celebrated on May 1.

Antonio Noboa, president of Barcelona, said at the press conference that Espanyol is a top team, and the match is endorsed by the Spanish League. He added that it is a “pleasure that Felipe Caicedo comes with his club” to dispute this friendly game.

Emelec will inaugurate its stadium in 2016