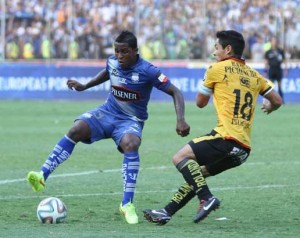 Barcelona defeated Emelec 1-0, with a goal from Argentinian Ismael Blanco in what was the “Clasico del Astillero” played at the Monumental stadium, corresponding to the sixth date of the National Cup.

Blanco was the player who scored, 15 minutes from end of time after an attack created from Barcelona’s defense which gave the win and sealed the victory in their favor.

A final scoring play was wasted by John Narvaez in the supplementary minutes with which the team Emelec could have tie the game.

This victory allows Barcelona to keep the tip of the second stage of the Ecuadorian championship and continue with the aspiration of winning the title in dispute.