Second American is punished for “hostile acts” in North Korea 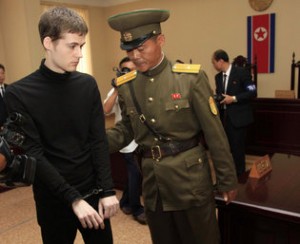 North Korea condemned the American Matthew Todd Miller to six years of hard labor, for committing “hostile acts” as a tourist in the country, according to state media reports.

Matthew Miller, after Kenneth Bae, becomes the second American who is serving a hard labor sentence in North Korea. A third, Jeffrey Fowle, is awaiting trial.

“He committed hostile acts against the DPRK when entering in territory of the DPRK disguised as a tourist in last April,” said North Korea in a brief statement.

Miller, a twentysomething native of Bakersfield, California, came into North Korea in last April, after which he broke his tourist visa and sought asylum to Pyongyang. He was in a private trip without foreign guides, according to Uri Tours, the company that organized his tour.

Vatican’s Car is stopped with drugs in its interior