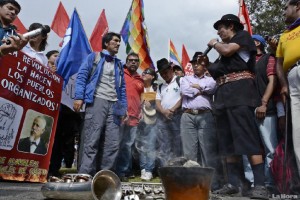 The protests of those who are against the Water Law continues. After the indigenous march ended on Wednesday and the Parliament of Peoples was created, now the its indigenous leaders proposed to form Provincial Assemblies.

The first will be held this morning in Loja, after a march from the outskirts to the center of the city. The President of the ECUARUNARI Carlos Pérez Guartambel said that the Coordinator of Kichwa Saraguro People (Corpukis for its Spanish acronym) and various movements, such as students, teachers and workers will participate in the Provincial Federation of Communes of Loja (Feprocol fir its Spanish acronym).

The provincial parliaments aim to spread the decrees of the national body between the bases and collect the specific problems of communities for inclusion in the discussion agenda, said the Secretary of Parliament Rosana Palacios.

The leaders of the Parliament agreed to return to the capital on August 7 for the second national assembly.