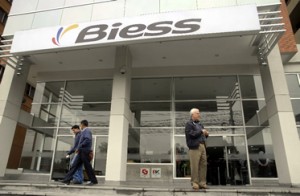 The Bank of IESS (Biess) published on Friday, May 30 the convocation for the merit and opposition competition to designate the General Manager of the institution, vacant position for over ten months ago.

The competition is executed by the Institute of Meritocracy. The Biess had not complied with the designation since its last manager, Efrain Vieira, who resigned  on July 11 of last year

Since then, managers like Roberto Machuca and Eduardo Moreno (who is still in office) have been assigned.

Víctor Hugo Villacrés, President of the board of IESS, said that in two months the names of the candidates will be announced.

Indigenous ask to include their proposals in the Water Law