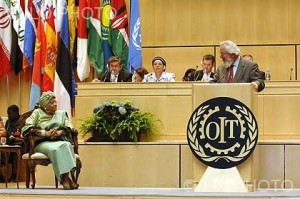 A delegation of the Labor Union of the Public Sector, which is in Switzerland, will deliver a copy of the draft Organic Code of Industrial Relations to the International Labour Organization (ILO).

Diego Cano, Coordinator of the Trade Union of the Public Sector,  said that the document will be delivered to the members of the Application of Standards Commission for its review. “Its approval would incorporate many other disadvantages (for employees),” noted Cano on the proposal prepared by the Executive.

Among the issues that concern this group are the monthly allocation of the thirtheenth and fourteenth wages, the elimination of the employer’s retirement, the permission to declare strikes only on the outside the company buildings and the creation of unions by branches, among others.

Indigenous ask to include their proposals in the Water Law