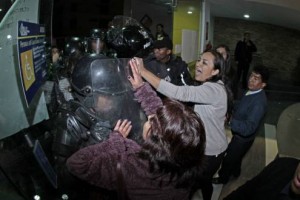 The Ecuadorian Teachers Unemployment Fund (FCME for its Spanish acronym) will be controlled by the Bank of the Ecuadorian Institute of Social Security (BIESS), this was notified in writing by the Superintendent of Banks, Christian Cruz. This resolution will take effect due to the results of an audit conducted by KPMG of Ecuador, which determines that the entity received contributions from the State.

The notification was sent on Thursday to the FCME manager in Guayaquil, Betty Suque, along with another signed by the manager of BIES, Patricio Chanabá, which reports that her functions would cease on Friday.

Policemen surrounded FCME offices in the cities of Quito, Cuenca, Esmeraldas and Babahoyo, but the reasons were not explained.

The Superintendency document states: “Through Official Communication dated May 14, 2015, KPMG of Ecuador Limited Company, notifies to this organization (the Superintendency) that the Ecuadorian Teachers Unemployment Fund has received state support.”