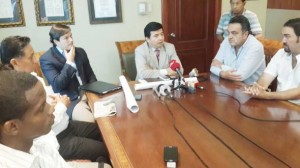 The mayors of Samborondón and Daule, reached an agreement on bordering territories. (Source: El Universo)

Mayors Pedro Salazar, of Daule, and José Yunez of Samborondón, reached a partial agreement by 80 square kilometers of bordering territory during a conciliation hearing organized in the Prefecture.

According to statements of Xavier Sandoval, president of the Boundaries Commission of the Provincial Council, the mayors decided “a partial agreement on the boundary line between the two jurisdictions.”

“It remains to solve only about 8 square kilometers and the rear corresponding to what is called the Gallardo island _ (…). This is a big step because the 60, 70% of the line of conflict between Daule and Samborondón is being solved,” said Sandoval.

He noted that the prefecture should geographically verify that delimitation and convene a new appointment to define the county belonging of the not yet defined territory.