Buenos Aires suffers damage and flooding due to temporary 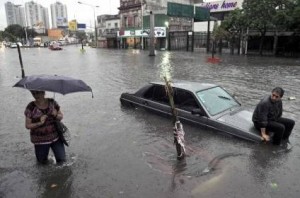 Buenos Aires suffered a heavy storm of wind and rain on Wednesday causing damage, flooding and evacuated dozens of vast sectors of the province, where the two airports also suffered cancellations and delays.

The National Weather Service maintains an alert throughout the province, where the main town affected is Bragado, in full’s agriculture prairie, with about 40 thousand inhabitants (200 miles west of Buenos Aires).

Serious damage with blowing up of roofs and trees collapse arose in the place, though no casualties were reported. While large parts of the city suffered power outages, according to local authorities.

In the city of La Plata, 62 kilometers south, it happened something similar, where in addition part of the roof of Estadio Unico resulted also affected.

The storm came after two days of high temperatures near 40 degrees, a record for the month of October (austral spring) that occurred between Monday and Tuesday in the center of the country.