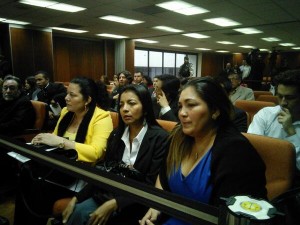 Las Dolores after of 11 years, still waiting for justice.

One of the processed policemen in Las Dolores case yesterday testified at the adjudication hearing and ratified before the Criminal Chamber of the National Court of Justice (CNJ) that he was pressured by other uniformed to involve the Mayor of Guayaquil, Jaime Nebot, in exchange of his freedom.

GIR agent Douglas M. Yepez, stood his complaint and insisted that on December 4, 2013, the Police Lieutenant Colonel Cesar Teran Andino, Captain Michael Davó Buitron and Sergeant Luis Benalcázar Mesa, would have pushed him to involve the bourgmestre in three events: the formation of an anti-crime group, an alleged purchase of judges to absolve those involved in the case (Las Dolores case) and the payment of their defenses.

“When I was told to involve another person (Nebot,) I felt cornered, but then I reflected and I refused. I prefer to spend years in jail rather than lie about it”, he said.

He gave the details and the names of the visitors at the Prosecutor´s Office on March 20.

Yepez is one of the 11 accused for the alleged murder of eight people in a pharmacy in Guayaquil on November 19, 2003. He gave his testimony on the seventh day of the trial.