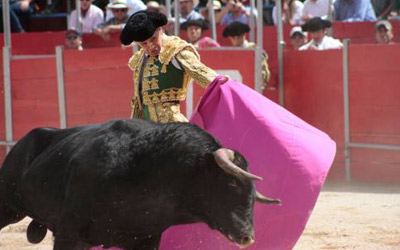 The bullfair Jesus del Gran Poder which is being carried out for  the anniversary number 479 of the founding of the capital , in Tambillo, South of Quito, yesterday completed its second day, in which participated  bullfighter from Guayaquil, Guillermo Alban and Spanish Ivan Fandiño.

On the outskirts of the mobile bullring, several inhabitants of the parish were to offer different types of typical meals, as well as souvenirs  related to this activity during the bullfighting day.

Bullfighting fans took over the whole bullring and continually shouted Viva Quito!, after singing the city’s hymn a cappella,  which later was accompanied by music.

Following the popular consultation on May 7 of 2011 that asked  the people of Quito if they agreed with the banning of killing the bull in the arena as part of the show, this measure was adopted since 50.8% of the population said to be in favor of the ban.

Carmen Loachamin, saleswoman of guinea pigs, expressed her satisfaction with the fact that the fair is being carried out  in Tambillo, since it allows the people to know the place and its inhabitants, who were organized to create traditional dishes to be sold.