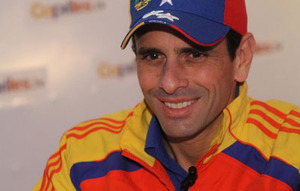 “Denounce the forced vote.” So says the title of the video that can be seen in HenriqueCaprilesR, his youtube account that diffuses an alleged fraud pattern in order to forge the vote in favor of the regime candidates account name.

Capriles, in his role as head of the electoral campaign of the opposition in the municipal elections of December 8, warns voters through their account on the social network Twitter. While in his youtube the video stresses that the government, who want to know how to blame each elector to vote, members of the regime to situate Maduro behind the voter while voting, to vote this way by the ruling.

According to Capriles to this embodiment, made ​​he lost the presidential election last April 14 by less than 300,000 votes out of 15 million votes. Subject he argued before the Supreme Court, which dismissed his complaint alleged fraud.