Suspected skeletal remains of the apostle Peter cause controversy 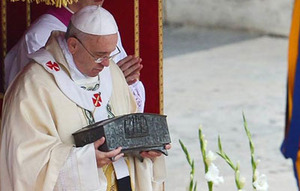 After the Vatican publicly showed last weekend, the relics of the apostle Peter. The scientific debate over whether the skeletal remains belong to the first bishop of Rome arose again. The pope Francisco prayed in front of the remains at the beginning of Sunday service and then held the box in his hands for several minutes before the homily.

Vatican archaeologists disagree and so the debate continues today, as speculation about the authenticity of the Shroud of Turin.

It is noteworthy that no pope has stated that the bones are those of Peter, but Paul VI said in 1968 that the remains found in the necropolis under St. Peter were “identified so that we can consider convincing.”

During the research, archaeologists discovered a monument with a coffin in honor of St. Peter and an engraving in Greek that read: “Peter is here.”