Cevallos resigns as Ministry: “I leave with the satisfaction of having accomplished”. 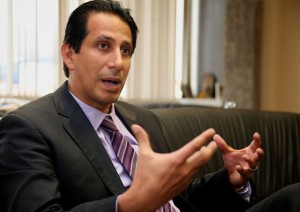 The Sports Minister José Francisco Cevallos announced his formal resignation to the State´s portfolio he represented from May 24, 2011.

At a press conference, the Minister dismissed “exogenous factors”, which would have carried him to step aside, and insisted that he does it to dedicate time to his family.

“I leave with the satisfaction of having accomplished and looking comply with my family. This management has been absorbing. (My resignation) It is a personal, family issue, I do not think there is another reason why I had submitted my resignation”, he said.

The still Secretary of State thanked the Ecuadorian people for their support during his term. “Today my function comes to an end. Thank you all for the support, but especially to all athletes, who are the most important”, he said.

Moreover, Cevallos does not rule out his future as a sports leader and the possible candidacy for the presidency of the Barcelona Sporting Club (BSC). “You never know what will happen, let’s see, today I will dedicate myself to my family. These are aspirations, I never saw myself as a Minister, but I always saw myself as a sports leader, let’s see what will happen in the following weeks or months”.