Chavez supporters celebrated the 57th anniversary of the democratic restoration 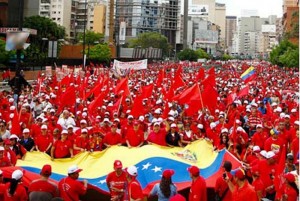 On Friday, January 23, tens of thousands of Chavez supporters took to the streets of the western Caracas during the celebration of the 57th anniversary of the establishment of democracy in Venezuela, in a demonstration to honor the “martyrs,” in what has been called “March of undefeated.”

This is an act to vindicate thousands of leftist political leaders, who assure, were victims of repression of the bodies of the State during the dictatorship and the governments that preceded the “Bolivarian revolution.”

The march, led by several officials of the government of Nicolas Maduro, is in memory of Fabricio Ojeda, one of the politicians who participated in the civil rebellion that overthrew the dictatorship since over fifty years ago.