Civil War Breaks Out in Libya 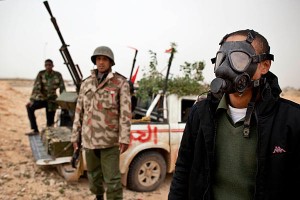 Today several tanks took up positions around public buildings as well as government offices, sandbags were mounted for defense and now the residents of the capital are trapped in their homes. Thousands of soldiers patrolled the streets accompanied by African mercenaries. Yesterday the mercenaries hired by Gaddafi cleared of the demonstrators in Tripoli’s Green Square.

Demonstrators’ corpses are being piled in hospitals from the shootings of the previous two days. Meanwhile several ministers, generals and diplomats around the world have defected. Some officials are trying to rally people to support Col Gaddafi. Recently the Libyan dictator said in his Tuesday speech he called the aid of his supporters to “chase away rats and terrorists.” The opposition groups informed that the Khamis Brigade, loyal to Gaddafi, started its approach towards to the cities of Misrata and Zawiya since they are under the control of the rebels.

A resident of Misrata, Soliman Albrassi, stated that forces of Gaddafi attacked the television station of the city. The private army of the dictator has also fought in the city of Sabratha because the rebels burned government buildings and police stations there. Finally Gaddafi and his sons are working on a plan to regroup in Tripoli and the province of Sirte. The situation degenerates as more and more people gather up to oppose Gaddafi.