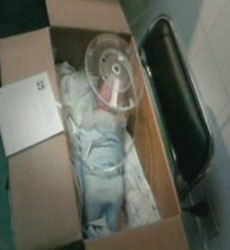 After an inspection on 9 March, the Ombudsman of Santo Domingo de los Tsáchilas, Ecuador, it was evident the conditions in which the Hospital Gustavo Dominguez (in that province) was attending the maternal and especially newborns.

The babies were placed in boxes and plastic tubs supported by chairs. In many cases the babies had to share radiant cribs and cots. This hospital has the capacity to respond to 8 infants per day, but receives an average of 26 to 28. The room has an area of 84 m² for 8 beds, but there are 16,and 4 thermal cribs which only 2are working.

The area was isolated since last Wednesday for subsequent fumigation and sterilization. Yesterday it reopened in just a 40%, according to hospital sources. There were found three bacterias and because of that thirteen infants died between January and February of 2011, according to the Ombudsman Office. Jaime Jaramillo, provincial health director, dismissed such explanations.

Galapagos was Affected by Remnants of Tsunami

Brewery Fights to Stop an “Illegal and Unfair” Sentence