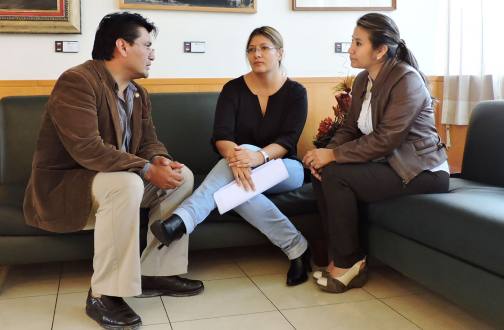 A year ago the Pachakutik former asemblyman Cléver Jimenez and Fernando Villavicencio (his advisor) are fugitives from the Ecuadorianjustice.They left their homes when the National Court of Justice made the conviction of 18 months in prison for libeling against the Ecuadorian President, Rafael Correa, and then was reduced to twelve months.
Veronica Sarauz, wife of Villavicencio, said that since March 22 the prescription order of the judgment can be formalized because the law empowers them to realize it. Jimenez’s lawyer, Julio César Sarango, made that request to the National Court of Justice on March 3.

The changes generated in the Criminal Procedure Code removed the figure for which they were sentenced and allows the prescription of the sentence. The conviction of first instance was issued in April 2013.

Jiménez’s wife, Rocio Alba said: “Nothing of what happened was right, we have seen a justicy purchased by the Government but I’m sure in the coming days he will recover his liberty and dedicate to his family and his regular affairs,” she said.