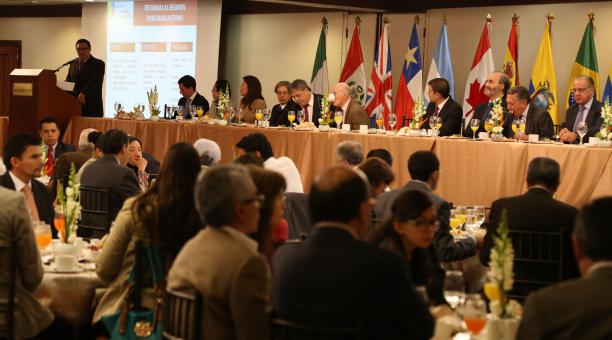 Yesterday, about 200 businessmen linked to the Binational Chambers Federation attended to the conference on new incentives to the Production Code. Among those presents were representatives of Colombia and Peru, who expressed their ideas on the subject.

The exposition should have been chaired by the Minister of Industries, Ramiro Gonzalez, but he could not attend it. As his replacement, Denis Zurita, Under Secretary of Commerce of the Ministry of Industries and member of the Committee of Foreign Trade (Comex), was present.

Zurita said that for the clearance of the exchange safeguard the Comex must sign a resolution, but the members of this body have not met to define the subject. The President of Comex is the new Minister of Foreign Trade, Diego Aulestia, who has not yet convened the meeting and there would not be a defined date about that, accrording to Zurita.

The representatives of the Andean countries indicated that they expect this to materialize until tomorrow, as it would be established in the agreements the country reached with Peru and Colombia.

Maria Teresa Villena, Director General of the Commercial Office of Peru in Ecuador, said that officials from the Ministry of Industries have been informed that the document would be ready and the next step would be the signing and publication of the text.

“The week is running and we are looking forward (…) I understand that the list is still being depurated,” Villena said.