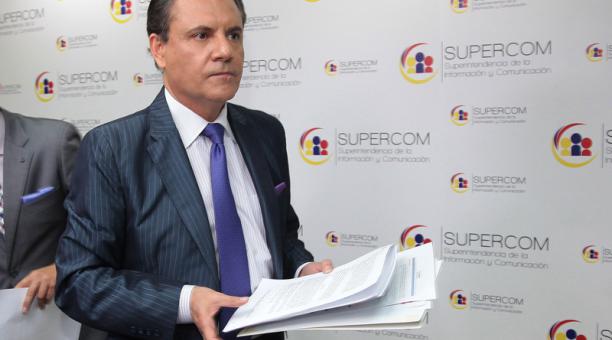 The Comptroller of the State (CGE) notified this Monday, February 5, 2018; Carlos Ochoa, superintendent of Communication, with the ratification of his dismissal. And the payment of a fine of 20 unified basic salaries (USD 7 720).

The official may file an appeal for review of the sanction. However, the application of this measure does not suspend compliance with the dismissal. In addition, the official has pending the predetermination of two glosses for USD 122 185. This is not yet firm, because they have not completed the 60-day term for the appeal.

These penalties are the result of the DAAC report -0065-2017 to the administration and to the contracts and agreements related to the rights of transmission and retransmission of Gamatv soccer matches. In total, in this case, the control body established civil and administrative predeterminations for USD 15.7 million, and indicated direct and jointly responsible to more than 20 ex-directors of the channel, between 2010 and 2016.

Ochoa and the rest of the glosses, among whom is also Enrique Arosemena, former general manager of Gamatv, had 60 days to present their defense. The holder of the Supercom did it but his tests were not enough to distort the sanction.

After being ratified, the dismissal will be applied -according to current regulations- to the position that Ochoa currently occupies in the Superintendence of Communication, where he has been the holder since October 8, 2013. The measure has to be executed by the nominating body. He was chosen by the Council of Citizen Participation.

The current members of this body are about to be dismissed after the victory of yes in the referendum. But the dismissal can be applied by the transitional council, which will be elected from lists of three sent by President Lenín Moreno, and which will have the same powers as the titular organ. The first solidary gloss against Ochoa, as the national director of News of Gamatv, between 2010 and 2013, sum USD 94 200.

In this case, the audit established that it collected values for bonuses and benefits without legal support, which they were authorized by the general managers and financial directors at their discretion, without justifying the reasons or specifying the corresponding calculations. In the channel, Ochoa received a monthly salary of USD 8,000. In the period under investigation he received additional monthly bonuses that ranged between USD 500 and USD 3 400. In the period under review, there were no policies for the payment of bonuses and other employee income and directors of Gamatv.

The workers’ right to receive these benefits was not established in the employment contracts either. In total, several managers and directors of the company received USD 272 924 in bonds. The second predetermination establishes that Ochoa benefited from USD 30 848, coming from Gamatv resources. With that money he bought a Chevrolet Captiva Sport 2.4L vehicle, silver color, 2010, with PBK-8448 plate.

The purchase sale contract was signed by the general manager of the channel. The auditors required information from Ochoa, who responded with a collection report of September 23, 2016, which justifies the payment of USD 20 915. With the interest generated by the delivery of the resources, the economic damage amounts to USD 27 985. Ochoa notification is given on the same day that the Legislative Administrative Council (CAL) of the National Assembly gave way to a request for impeachment against him.

The initiative is by Assembly members Lourdes Cuesta and Fabricio Villamar (Creo). The Supercom issued a statement this afternoon in which he described the resolution of the Comptroller General as “unconstitutional and arbitrary.” “In clear violation of due process, legal security and the right to defense; ratifies the dismissal of Carlos Ochoa for comments on his performance as National Director of Gamatv News, “the text reads.

The Superintendence informed that the notification will be challenged before the Contentious Administrative Tribunal, which suspends its execution. “It has no legal basis to generate a dismissal of a position that was not governed by the laws and regulations of the public service,” the statement concludes. (I)

Ecuador relaunches its trade agenda with the united states