CONAIE declared its headquarters as heritage of indigenous peoples 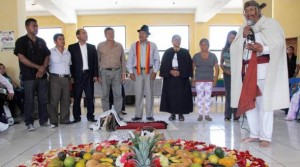 The headquarters of the Confederation of Indigenous Nationalities of Ecuador (CONAIE for its Spanish acronym) was declared this December 23 as the heritage of indigenous peoples and nationalities. This was the main resolution adopted by the emergency assembly of CONAIE that lasted six hours.

They confirmed they will not vacate the building, and for that, they organized permanent surveillance activities. While the notification of the Ministry of Economic and Social Inclusion on the unilateral termination of the bailment contract signed between the two institutions in 1991 indicates that the deadline for abandonment is January 6.

The Vice President of ECUARUNARI, Marco Guatemal, commited to permanently monitor the building to avoid eviction.