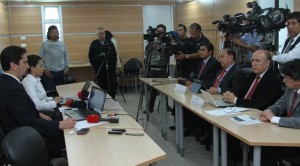 Members of the National Wages Council (Conades for its Spanish acronym) did not reach an agreement on the salary increase for 2015 after the meeting yesterday, the second on the subject, at the premises of the Labour Ministry.

The appointment started at 11:20. Xavier Estupiñán, President of Conades, welcomed the audience and an hour and 40 minutes later the meeting ended.

Arciniega, along with Fernando Ibarra, President of the Labor Ecuadorian Parliament, convened a press conference after the meeting and indicated that there was no agreement because of the unwillingness of the employers sector.

Due to the absence of an agreement, the Government will be the one that will set the rise. It is expected that the amount is made public on Tuesday, December 30th.