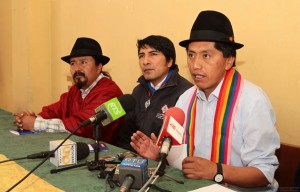 Presidents of the Confederation of Indigenous Nationalities of Ecuador (CONAIE for its Spanish acronym), Jorge Herrera, and from ECUARUNARI, Carlos Pérez Guartambel, met yesterday at the Commission on Food Sovereignty with representatives of Alianza PAIS to discuss about the draft Water Resources Law.

Pérez Guartambel said they were informed that the latest version of the articles would be delivered this week to them, and after this the CONAIE will meet to discuss it.

He confirmed that important points for the CONAIE are: the ban on mining activities in the fountains and water recharge areas, the de-privatization of water so its tenure would be redistributed, the creation of the Multinational Council that would allow participation (voice and vote), the autonomy of the Community system and the creation of the National Water Fund.

Herrera added that a proposal will be made from the last text and the CONAIE will form a technical committee.

In coming weeks the draft of the final report to improve the draft would be done.

In this, aspects of the prelegislative consultation and observations proposed in the plenary will be incorporated.

Superintendence of Public Services is proposed in Water Law