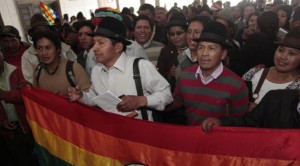 The President of the Confederation of Indigenous Nationalities of Ecuador (CONAIE for its Spanish acronym), Jorge Herrera, and Assemblywoman from Pachakutik, Magali Orellana, announced the sending of a draft Law on Prior Consultation to the Communes, communities, people and nationalities.

Orellana said that “at the moment there is no law to support the rights of citizens but an instructive conducted by the Legislative Council of Administration, undemocratically”.

CONAIE argues that the communities themselves are the ones that should decide on key issues because it is they who see the affectations of collective rights.

Jorge Herrera said about the treatment of Lands Act, that the Constitution is clear that when territorial and nationalities rights are violated, these should be consulted.

They also announced that the CONAIE will promote its own debate on the content of the law to prevent hoarding and deconcentration of land.