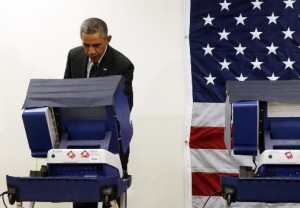 The Latin community of the US will support the Democrats at the polls on November 4th and may play a decisive role in the results for the Senate in six key states.

According to a poll conducted by Latino Decisions for the America’s Voice organization, released yesterday, 34% of the registered voters surveyed assured they would vote for a Democratic candidate, and 25% said they “lean” to vote in favor of that party, adding at least 59% of Latino registered electorate.

Meanwhile, only 19% of Hispanic registered voters assured they would vote for the Republican Party, while 6% said they lean toward it, adding 25% of the voting intentions of the community.

In November, USA held legislative elections midterm on which it will completely renovate the House of Representatives and two-thirds of the Senate.

Obama voted yesterday in Chicago for legislative, benefiting from this possibility that exists in some states, and called the voters of Illinois to do so. EFE / AFP