Conatel will meet to approve the granting of the 4G band 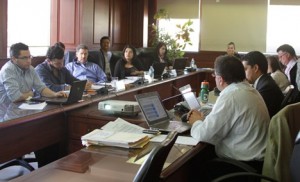 The National Telecommunications Council (Conatel for its Spanish acronym) expects to meet today to know the details of the negotiations that the Telecommunications Minister Augusto Espín carried out with the representatives of mobile phone companies Conecel (Claro) and Otecel (Movistar) to access to the radio spectrum space for the system implementation of fourth generation or 4G, and authorize the signing of contracts, said Roberto Aspiazu, member of the body representing the Chambers of Production.

Aspiazu said that the report of the National Telecommunications Secretariat (Senatel for its Spanish acronym), which contains a study of the 4G auction conducted in the region that will serve as a benchmark to analyze the economic part of the contracts, will be known during the meeting.

He added that other aspects related to the restriction of imports of cell phones that allow to exploit the 4G network will be reviewed.