Constitutional Court waits for the amendments text to debate 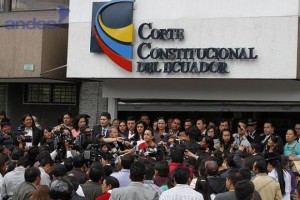 Wendy Molina, judge rapporteur, plans to distribute the document these days; but any call to discuss it in the court  has not yet been registered in the website.

The text proposes changes in the role of the Comptroller and the Armed Forces, the powers of autonomous governments and indefinite reelection.

The President of the Bureau of Justice, Mauro Andino (AP), said that the CC should issue its pronouncement until next week; Otherwise, the proposed indefinite reelection could be frustrated because it would not meet the deadlines prescribed by the law for electoral reforms.