Corpses of the Malysia Airlines plane are examined by Dutch forensics 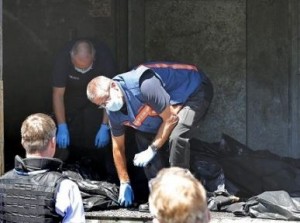 Three Dutch forensics arrived this Monday at the Ukrainian town of Torez in the Donetsk region, to examine the corpses of the Malaysian plane passengers, wrecked on Thursday.

The train with the remains of passengers of Flight MH17 of the Malaysia Airlines Company is in rebel-controlled area.

As reported by witnesses, forensics opened in the Torez station the wagons where there are corpses in the presence of the OSCE mission in Ukraine, led by Swiss Alex Hug.

Currently, they negotiate with the pro-Russian rebels the move of the train to the city of Kharkiv, where they would proceed to their identification and the families of the 298 victims of the disaster would attend.

Meanwhile, the Dutch Prime Minister Mark Rutte said that the purpose of his country was to make the wagons leave towards the territory controlled by Kiev.