Last Sunday, the head of the Colombian State, Juan Manuel Santos, announced before the House representatives and senators who took up their seats, that among the priorities of his government, there is the termination of presidential reelection.

The President, who on next August 7 will be sworn in for a second four-year term, said that the measure shall take effect from 2018, when his term ends. “Let it be clear that this extension is not going to benefit me, but the leaders who succeed me,” he added.

Reelection in Colombia was established in 2004, when then-President Alvaro Uribe promoted a controversial constitutional amendment adopted through the vote of country escapees who ended up in prison, and that earned him a reelection in 2006. 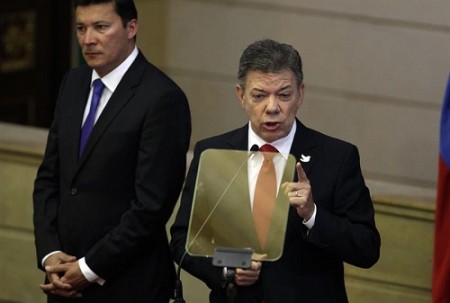 Santos during his speech at the installation of the new Congress.