Correa is optimistic before crisis to be presented this year 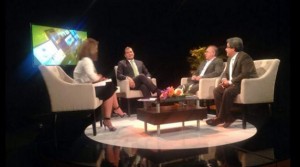 President Rafael Correa evaluated in a discussion with the public media, the eight years of government of the Citizen Revolution. The President said that Ecuador would be prepared for the crisis it would suffer in 2015.

Correa said that tough times are expected because of the fall in oil prices, but the government would be “very well prepared” to deal with the eventual financial crisis.

The president acknowledged that 2015 will be a tough year and that a recovery is expected in 2016 with the operation of new hydropower plants. He also added that for this, the country is being protected by safeguards and financing.

On achievements during his presidency, he said: “Where we have advanced more has been in education,” he also highlighted the progress in areas such as energy generation and roads, reduction of inequality, competitiveness and policies in favor of the disabled.