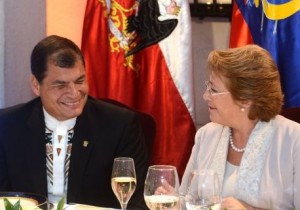 President Rafael Correa held yesterday a meeting with her counterpart, Michelle Bachelet, where they discussed various issues of bilateral interest.

The meeting between representatives of the two countries took place in the seat of Government, at La Moneda Palace, where the Chilean and Ecuadorian Secretaries of State also participated.

The leaders agreed to promote regional integration within the framework of Unasur, but without obviating other blocks as the Pacific Alliance.

They also they pledged to strengthen energy integration and scheduled a ministerial meeting between the two countries in October.

The Ecuadorian President today will receive the Doctor Honoris Causa mention of the University of Santiago, former Technical State University, and then will visit the headquarters of the Economic Commission for Latin America and the Caribbean (ECLAC).