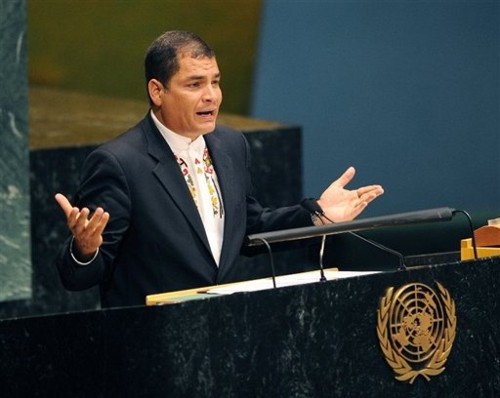 Ecuadorian President Rafael Correa rejected strictly the military intervention and criticized the decision of the United Nations Organization (UN) which approved the air exclusion zone in that country.

Since the Foreign Ministry on Saturday issued a statement which called the military offensive as unacceptable intrusion.

Correa noted: “Let them solve their own problems. Did not we learn anything about the case of Iraq? How we fooled (…). The citizens of the Middle East are those who have to resolve the situation (…)” and warned it would seek the Union of South American Nations (UNASUR) to rule on the crisis.

Meanwhile, the Security Council concluded that the United Nations on Thursday will discuss the situation in Libya because of the growing criticism for its intervention.

The new session will be given one week after the Security Council approves the use of “all necessary measures “to protect civilians and enforce an air exclusion zone in Libya.

Bryan Adams Receives a Star in The Hollywood Walk of Fame