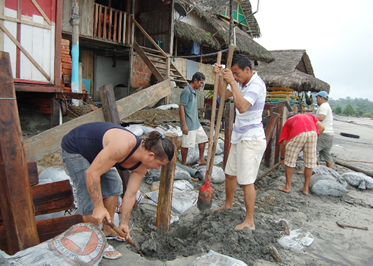 The rising tides occurred in Jambelí Island, El Oro Province, caused severe damages to homes and businesses adjacent to the beach. Over 40 families were forced to flee their homes along with wax and even animals.

The retaining walls could not withstand the force of the waves that reached 2 feet tall and at least eight homes and businesses where affected.

Because of these events, tourism went down significantly, and the economic losses of the population are substantial.

People were clamoring about the lack of management by the mayor in this area. The province of Esmeraldas also records the costs beaten flooding Sua, Muisne Green River. The strong waves affected more than 43 homes.

Meanwhile, in Manta, province of Manabi, lifeguards urged bathers to leave the beach because the waves of the Bat came to the pier and there was flooding in homes and businesses too.