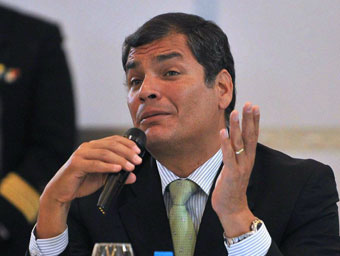 President Rafael Correa, thanked yesterday, in his weekly report, the Assembly members who supported the Declaration of national interest that allows the oil exploitation from blocks 31 and 43 of the Yasuni National Park.

He stressed that there will be a responsible extraction, which is considered  “necessary to overcome poverty”, and added that the intangible zone will not be intervened, “where the peoples in voluntary isolation supposedly live”.

He also spoke of his intention to resume the negotiations with Europe, which means an open door for Ecuador to adhere to the multipart commercial agreement which already was materialised with Colombia and Peru. “The people who believed the negotiations had to continue were right ,because the positions can be flexible”, said.