Immigrants in the United States ask for a immigration reform 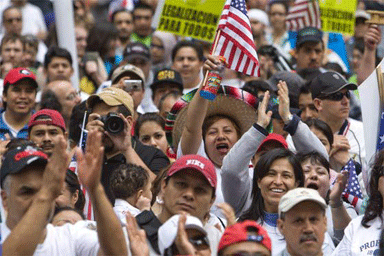 For the National day for dignity and respect, many activists marched in over 60 US cities to demand the immediate adoption of the immigration reform that is paralyzed and has weakened  because of the partial closure of the Government.

There were approximately 150 public events in cities like Miami, New York and Los Angeles to demand the opening of the Government, where the immigration reform has being facing obstacles in Congress for four months by disagreements between Republicans and Democrats.

Yesterday, the House of Representatives passed a Bill to pay retroactive wages to 800,000 workers, who are in forced leave since last Tuesday, when operations resume.