Gabriela Rivadeneira, Soledad Buendía, Carlos Viteri, the correista legislators who left their place in the National Assembly and stayed at their own will in the Mexican Embassy, ​​want to continue receiving their salary of $ 4,759 plus benefits. Yesterday, the Legislative Administration Council (CAL) decided to withdraw it provisionally, until they are reinstated (if they want) to the functions for which they were elected. But the parliamentary bloc of the Citizen Revolution considers it an outrage. An “arbitrary decision,” said Juan Cristóbal Lloret, who was the one who gave his face in his defense (or in his pockets). 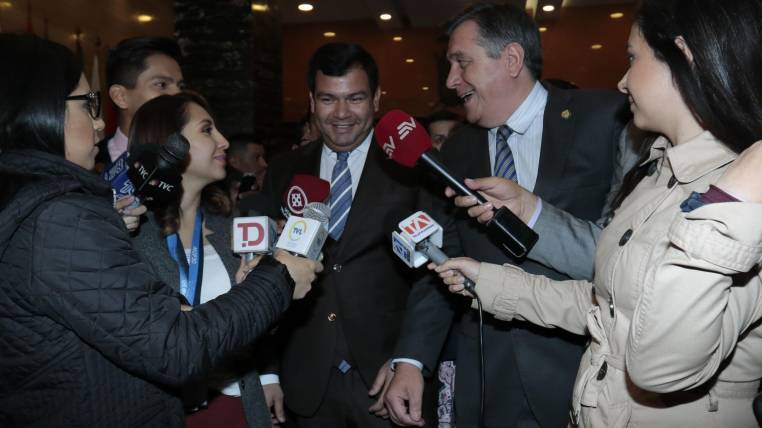 Resolutions The political debate focused yesterday on the CAL. President César Litardo, Patricio Donoso and other members reported on the treaty.

The day before, in anticipation of the decision of the CAL, Lloret had sent an email to President César Litardo requesting that the right to the defense of the three assembly members be respected. It is necessary, he said, “that the CAL can listen to them through the different telematic means.” Because leaving the Embassy and going in person is something that they don’t seem willing (fear is free). The correísta legislator insisted that there is no legal basis to withdraw their salary: “Tomorrow I could go to a master’s degree – he argued – absent me for a month and leave my alternate” without losing the right to receive the salary of assemblyman. The fact is that the CAL welcomed and did not accept the request: it agreed to listen to Rivadeneira, Buendía and Viteri, and scheduled their appearances tomorrow. But until then, and waiting for the three correistas to solve their situation (which seems to be more permanent and definitive than a master’s degree), he withdrew their salary.

“It will be untimely for them to be received if a decision has already been made,” was Lloret’s reaction.

In the same situation is also the correist Yoffre Poma, arrested for having participated in boycott actions to oil infrastructure. This case has a clear precedent: that of Assemblyman Esperanza Galván, arrested for corruption while in office; as explained by the social Christian Cristina Reyes, the members of the CAL were subject to a comptroller glossary for not having suspended the payment of their salary while in prison.

For the rest, while the Plenary gave itself to the treatment of the School Feeding and Social Security laws, the debate on the causes and responsibilities of the social upheaval that the country suffered between October 2 and 13 continued making its way into the assembly. Yesterday, the CAL decided to derive to the Plenary the responsibility of appointing the multiparty commission that will assume the investigation of these facts. The item has already been included in the agenda for the ordinary session tomorrow, Thursday 24.

In the afternoon, two requests to change the agenda landed again in plenary. First, CREO Assemblyman Fernando Flores proposed to debate a resolution to reject the intervention of the Nicolás Maduro regime in Ecuadorian internal politics, in order to destabilize democracy. Two eloquent videos served as an argument: in the first one the Venezuelan dictator appears addressing the Sao Paulo Forum with the words “We are fulfilling the plan, you understand me”; and reiterating: “The plan is in full development.” In the second one, Diosdado Cabello, president of the Venezuelan Constituent Assembly, is heard referring to the events of Ecuador and Chile as “just a little brisita, the hurricane is coming”. Flores’s proposal was approved with 76 votes in favor and 25 from correismo against.

The second proposal, by the socialist Vicente Taiano, did not pass. He wanted to discuss a resolution of rejection of the expressions of the president of Conaie, Jaime Vargas, who announced his will to “make our own army.” The opposition of the correísmo was added that of Pachakutik and several assembly members of the ruling party and the BIN, as well as the abstention of people from CREO (Homero Castanier, Jeannine Cruz, Gloria Astudillo …). 56 votes in favor were not enough to approve the proposal.